Square agreed to pay $29 billion for Afterpay, an Australian fintech specializing in buy now/pay later services. The digital payments leader also released Q2 results ahead of Thursday’s scheduled date. Square earnings per share spiked 266% to 66 cents with revenue up 266% to $4.68 billion. Analysts expected EPS of 30 cents on sales of $5.03 billion.

Li Auto (LI) on Sunday reported July deliveries of 8,589, up 251% vs. a year earlier. Xpeng (XPEV) on Monday reported deliveries jumped 228% to 8,040. Nio deliveries rose 124.5% to 7,931. Fellow Chinese EV maker BYD Co. (BYDDF) is set to release July sales within the next few days. Tesla (TSLA) China sales for July won’t come for at least another week. Tesla has made a series of moves in China, including exports, cheaper variants and outright price cuts.

Chinese EV makers are trying to maintain rapid growth amid chip shortages and other supply-chain issues plaguing the auto industry. Meanwhile, China stocks have come under heavy pressure as  Beijing has cracked down on private industry, including U.S.-listed Chinese companies, Internet and consumer-data heavy firms and more.

So far, China has not cracked down on automakers or EV makers specifically. But the risk is always there. More U.S. investors may steer clear of Chinese equities entirely, while others will be extremely wary.

China EV sales come amid signs of a slower Chinese economic recovery. China’s official manufacturing index fell 0.5 point in July to 50.4, the weakest since February 2020 and below views for 50.8. The nonmanufacturing index dipped 0.2 point to 53.3, in line with estimates.

Li Auto and XPEV stock popped before the open, while Nio edged higher. BYD stock was not yet active. Tesla stock rose modestly.

Nio stock, Xpeng, Li Auto and BYD Co. all rallied last week back above key levels amid signs that China wanted to halt the broader sell-off in Chinese stocks. BYD stock arguably cleared an aggressive entry and is near a legitimate buy point.

Tesla stock is on SwingTrader. Nio, BYD and Li Auto stock are on IBD’s Five Best China Stocks To Buy And Watch.

Crude oil futures fell more than 1% before the open.

The Senate could vote on the actual bipartisan infrastructure bill, with roughly $550 billion in new spending over several years, later this week. The House isn’t expected to vote on the legislation until there’s agreement on a mammoth $3.5 trillion spending bill.

A national eviction ban imposed during the pandemic expired Saturday. That could spur foreclosures and evictions, as well as reduce consumer spending outside of housing. It could spur more job seekers.

Remember that overnight action in Dow futures and elsewhere doesn’t necessarily translate into actual trading in the next regular stock market session.

Moderna and Pfizer both raised prices for their Covid-19 vaccines in their latest European supply contracts, according to the Financial Times. Meanwhile, the Wall Street Journal reported that the FDA is under pressure to give full approval to both vaccines. That could come for the Pfizer/BioNTech (BNTX) vaccine next month.

Pfizer stock rose a fraction before the open, BioNTech 5% and Moderna 2.5%.

While software paused last week and there were some high-profile earnings blowups, market leadership expanded, with strong action in chips, steel and homebuilders.

Reflecting more-speculative story stocks, ARK Innovation ETF (ARKK) slid 2%, retreating back below its 200-day line on Friday. ARK Genomics ETF (ARKG) lost 1.5%, finishing the week below its 50-day, which is below its 200-day. Tesla stock is the top holding across the ARK Invest ETFs.

Five Best Chinese Stocks: Only One Is Near A Buy Point

BYD is on tap sometime this week. All four automakers enjoyed higher sales in Q2 vs. Q1, though Nio’s sales only rose slightly amid chip-related production woes.

So far, Beijing hasn’t targeted EV makers or automakers generally. It may view the auto sector — especially EVs — as a strategic industry. China may want to protect local EV makers as they try to become real auto industry contenders.

So it’s not surprising EV makers are heavily represented about the best Chinese to stocks to watch right now. But the risks are always present for Chinese stocks. As EV and other automakers expand driver-assist systems, their increased consumer data could spur more oversight and controls from the Chinese government.

The China EV stocks have held up better than Chinese stocks generally, though they all faced some big drops in late July. All are trying to work their way back after tumbling 50% from highs.

Before the open, Li Auto stock advanced 5% and Xpeng climbed 5%. Nio stock rose a fraction. BYD stock was not yet active.

Nio stock rebounded last week to close up 1.6%, just reclaiming its 50-day and 200-day moving averages. XPEV stock lost 1.15% for the week, but also rebounded back above those key levels. Li Auto stock surged 10.3% for the week.

Nio, Li Auto and Xpeng stock all have handle-like formations, with their stocks close to breaking downtrends in their handles. But the volatile “handles” are too low in very deep bases to be proper. Buying a money-losing Chinese stock from a trend line within a too-low handle within a too-deep base is adding risk upon risk upon risk.

But these “handles” could turn into short bases within the larger consolidation, offering a somewhat-safer pattern.

Unlike its startup rivals, BYD is profitable and much larger, selling EV cars and buses as well as hybrids, gas-powered vehicles and is a big battery producer. BYD sold 54,841 all-electric cars in Q2, not far below Tesla’s 61,745. The China EV maker sold 99,828 new energy vehicles, which also include hybrids and commercial vehicles.

BYD stock, which never undercut its 200-day line, jumped 7% for a second straight week, closing Friday at 30.81. It’s already broken a downtrend in a handle, with a 31.40 official buy point. The BYD stock base is 52% deep, which is less than ideal but better than its China rivals. The midpoint of the handle is above the midpoint of the base.

But it still might be better if BYD stock could hold in its range for another week, turning its handle into a short base.

Nio stock and Xpeng have dual listings in the U.S. and Hong Kong. U.S.-listed Li Auto is moving toward a Hong Kong listing. BYD stock is listed in Hong Kong and trades over the counter in the U.S.

Why This IBD Tool Simplifies The Search For Top Stocks

Tesla China sales fell 16% in Q2 vs. Q1, even as Model Y production continued to ramp up. Is this a sign of weak demand? It’s hard to be definitive. Chip shortages and other supply-chain issues may be taking a toll with Tesla, as with Nio and automakers generally.

Tesla is exporting more and more of its Shanghai production, mostly to Europe. Starting in Q3, that will include made-in-China Model Y exports to Europe, the last big market for the crossover. So, in theory, there could be plenty of local demand, Tesla just isn’t making the supply available.

That may be especially true in July, as Tesla exports a lot early in the quarter.

Still, exporting the Tesla Model Y about six months after local deliveries began isn’t a great sign. Tesla also has introduced a much-cheaper, lower-range Model Y variant, another indication of flagging demand. Tesla last week also cut the local price of the made-in-China Model 3 by about $2,400, even with a huge share of production already going to China. That’s in contrast to the U.S., where Tesla has raised the Model 3 and Model Y prices several times amid the broader new-car shortage.

Keep in mind, the Tesla Berlin plant will be operational soon. The EV giant says it’ll begin production by year-end, though that could slip to early 2022. In any case, in the near future, Shanghai’s main export market will close, raising a big question of whether local demand can absorb nearly all of its production.

Tesla reported better-than-expected earnings on Monday, but also delayed the Semi to 2022 and suggested the Cybertruck also wouldn’t be produced until 2022. It also indicated that the 4680 battery cells — key for the Semi and Cybertruck in particular — are not ready for mass production.

Tesla stock initially dipped following earnings, but found support at key moving averages. On Thursday, TSLA stock popped 4.7%, just topping a trend line going back to the January peak of 900.40. On Friday, shares rose 1.45% to 687.20. Investors also could use 700.10, just above short-term highs, as another early entry.

The stock market rally had a generally positive week. The Dow Jones and S&P 500 barely dipped from record highs. The Nasdaq retreated a little more, but only to its 21-day moving average. The Nasdaq, even the big-cap Nasdaq 100, don’t look close to extended right now.

The best sign for the market rally came in leading stocks. Yes, Amazon.com (AMZN) and PayPal (PYPL) tumbled on earnings, but there plenty of earnings winners as well. Another batch of quality stocks broke out or flashed buy signals, including some steel and housing names. Software names cooled last week, but still look strong.

What To Do Now

The trillion-dollar tech earnings are in the books, but hundreds of companies report this week, including dozens of highly rated stocks. Take heed of the lessons from Amazon earnings. If you have stocks with little or no gain heading into earnings, you’ve got a big decision to maker. IBD generally recommends having a decent cushion for holding onto a position into earnings. That cushion depends on your risk tolerance, the size of your position and your conviction in the stock.

Also keep track of watch lists stocks near buy points with earnings on tap. That could offer new buying opportunities in the days ahead.

Don’t feel the need to be too aggressive. It’s a confirmed stock market rally, but it’s definitely not 2020’s mad bull.

Read The Big Picture every day to stay in sync with the market direction and leading stocks and sectors.

Catch The Next Big Winning Stock With MarketSmith

IBD’s Leaderboard Is Turning 10! Celebrate With Us

How to get ready your patio and pool for a hurricane

Wed Aug 4 , 2021
— Suggestions are independently chosen by Reviewed’s editors. Purchases you make by means of our backlinks may possibly make us a fee. Past week, when we viewed Elsa batter elements of the East Coastline, we were being reminded of the damage—from isolated tornadoes to “life-threatening” storm surge, according to a Countrywide Hurricane […] 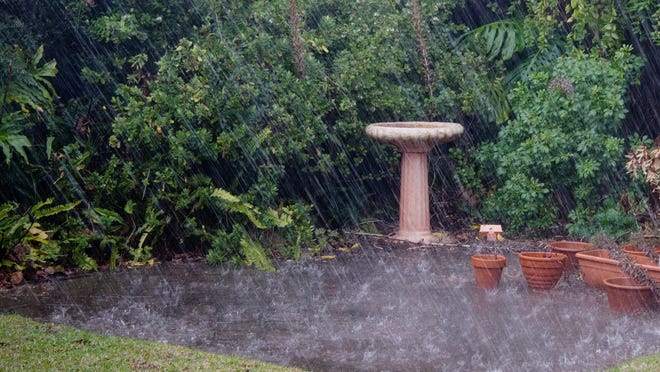